Bitumen like coatings are some of the oldest known products utilised in waterproofing, sealing and protecting structures.
Ancient Egyptians used bitumen like resins to embalm their dead. Centuries later the Vikings would use plant fibres soaked in bitumen to seal their wooden ships. Often these bitumen “ropes” are the main evidence left when Viking wrecks are discovered.

Bitumen occurs naturally in some parts of the world as a thick oily substance found submerged in lakes and often called tar pits. Most famously, the La Brea tar pit in California has provided some of the best preserved prehistoric fossils found to date.

The bitumen we use today is a more consistent manufactured product derived from crude oil. Formed millions of years ago this oil is extracted from vast underground resources that can be discovered either below ground or the sea floor.
Once recovered, the oil is refined through a process of heat to separate it into the many and varied products; Butane, Propane, Petrol, Diesel and then at even higher temperatures, Oils and Waxes.
The final product rendered is the sticky black material we now call bitumen.

Tar and Bitumen, aren’t they the same thing?

No! Tar is produced from coal, not oil like Bitumen. While coal was originally formed from plant material under the earths pressure, it is considered highly toxic as a processed material.
Coal Tar, creosote, pitch, moth balls and various other resins come from tar derived of coal.

Cost effective when compared to synthetic materials
Highly water resistant, in fact impervious to water
Exhibits great adhesion properties
The only real shortcoming of bitumen is that over relatively long periods of exposure to sunlight (UV) it tends to break down, harden and become brittle.

Adjuvate Australia has long recognised the specific performance benefits of bitumen based products and has developed a range of products to meet most applications. 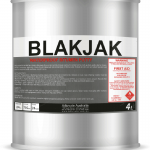 BlakJak
The thickest consistency, often called knife grade as it is installed with a putty knife or spatula. It is fibre reinforced to hold its body once applied.
Traditionally used to fix small holes and cracks in tanks or on roofs etc.
Not the highest UV resistance but will last for many years outside in the sun. 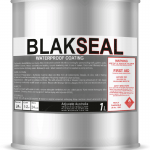 Slightly thinner than BlakJak to enable brush application and still fibre reinforced. Used to patch metal flashing, malthoid waterproofing or as a general gap filler.
This grade is perfect for use as a cost effective waterproofing membrane for retaining walls and the like. Always apply on the dirt side of the wall so that any water pressure ‘pushes’ the material onto the wall.
This product was commonly known as underbody filler for use on cars, trucks and boats.
UV resistance is similar to that of BlakJak. 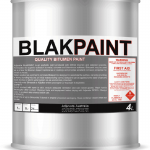 BlakPaint
Thin bitumen cut-back without fibre reinforcing to be applied by brush or roller.
Used as a ‘primer’ for further bitumen compounds or malthoid on concrete or metal. Can be used to seal porous substrates such as concrete tanks and pipes etc.
UV resistance is slightly less than the above, mainly because of its lower build thickness per coat. 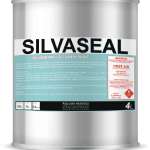 Much the same as BlakPaint but the material is filled with aluminium powder to provide additional UV resistance and lower absorbed heat. Contains no fibre reinforcement.
Used to protect metal surfaces, including old metal roofs, tanks, pipes etc. Also used as a finish coat over exterior bituminous waterproofing as it protects black bitumen from the sun, increasing longevity.
Highest UV resistance and protection of the range.